You are at:Home»Government»Education»Progressive America has a Brand New Hero: Bill Nye the Science Guy
By Aimee Fant on January 2, 2014 Education, Government
Spread the love 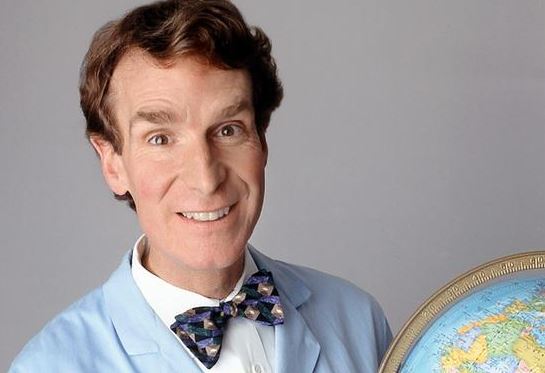 Just when we think the American educational system has gone to the bad place-never to return, when parochial “school choice” initiative voucher flood gates opened on the taxpayer dime, which now calls into question American students being taught evidence-based science and biology curriculum in the classroom, enter- Bill Nye, the Science Guy– to the rescue.

Asawin Suebsaeng of Mother Jones, , Thurs. Jan. 2nd, 2014- via the Sidwell Friends Alumni Magazine reports in an interview with Nye:

“We have a problem. We can’t have economic growth without basic investment in science and research. And we can’t have irresponsible school board members in Texas teaching that the earth is 10,000 years old. We can’t have us embracing scientific illiteracy.”

Conservative legislators in Texas adopted state-wide text-book policy in 2009 that taught Intelligent Design, better known as creationism –  in place of the biological, evidence and scientifically based Theory of Evolution, the Big Bang Theory, etc until in November, 2013- this was finally struck down.

This is a trend that is spreading among the educational systems in varying degrees in many red states. The Scopes’ trial, in which a teacher was prosecuted in Tennessee in 1925 for teaching lessons of evolution (which was in violation of Tenn. law that forbade this) shed light on scientific inquiry and later (decades later) brought about the separation of Church (Creationism) and State (the public, taxpayer-funded educational system). The Supreme Court’s decision in 1967 to overturn State policy banning curriculum that would limit scientific inquiry, validated the scientific method, and Evolution became the standard theory taught in American public schools.  This is beginning to shift, in America, as tax dollars are being funneled away from our public schools into private, parochial (religious) and charter schools that do not have to teach this curriculum.

Nye also believes that understanding asteroids and developing the technology to deflect them is an urgently needed American investment. Suebsaeng also reports that when Nye was asked about his top-three political passions, he said:  “Addressing climate change, raising the standard of women around the world through education, and asteroids.”

Nye continues by asking: “Why are people running around, worried about Obamacare when there is this?” (Asteroids that can do away with civilization altogether.)

Bill Nye vows to continue his fight against climate-change deniers, anti-intellectualism/anti-science politics out of love for his country.

“I fight this fight (for science) out of patriotism.”

Yes, even Progressive science savants/geniuses can be patriots too.

Aimee Fant is mother of 3, public educator, writer and a CASA for children.