It’s a Saturday morning in Middletown America and speakers from Maryland, Missouri, Michigan, and Illinois converge into a medium sized conference center to speak in front of a diverse group of attendees from around age 18 to 80 years of age. What kind of speakers would draw such a large group of people who on the surface wouldn’t have anything in common?

It was the Indiana CAFO (Confined Animal Feeding Operations) Watch Conference sponsored by the Socially Responsible Agricultural Project (SRA). The organizer was Barbara Sha Cox from Richmond, Indiana who invited speakers to update and inform interested activists and farmers in Indiana.

According to the conference material, the goals of this annual conference are: 1) to provide tools for effective communication about the environmental and health impacts of CAFO’s with local, state, and federal officials;  2) Networking for Indiana CAFO watch groups; and 3) Raise awareness of environmental and health issues related to CAFO’s in Indiana, our nation, and the world.

According to their www.indianacafowatch.com website, a CAFO confines the animals at all times and does not let them roam on the range.  These operations are sometimes referred to as factory farms because they resemble a factory in their composition and design.

The SRA estimates that there are over 625 CAFO’s in Indiana who receive government subsidies and grants to raise animals for food.  As you listen to the speakers discuss their experience with these CAFO’s, it is not a pleasant picture. While we vote with our economic dollar and want fast food to be cheap, we live in denial about what this means for the animals.It’s no wonder the popularity of vegetarians and vegans have grown over the past several years. One food documentary after another addresses the methods of Big Food/Big Ag and their negative side effects on our bodies and environment.

Many local farmers have been replaced by CAFO’s because it is more efficient to produce food via assembly line methods and our demand for cheap and fast food requires a more abundant supply which is what has brought these CAFO’s into existence.

According to many sources, “Once you’ve seen what goes on inside a Concentrated Animal Feeding Operation (CAFO), it’s tough to accept the trade-off of horrific animal suffering in order to have cheap food.”

The problem is, the suffering of the animals is just the obvious problem with the industrialization of meat. Toss in contaminated food, environmental degradation and the gutting of rural communities, and the recipe for cheap, mass-produced food turns into a recipe for disaster.

In 2008, the U.S. Government Accountability Office issued a report urging the Environmental Protection Agency (EPA) to gather more information to protect U.S. citizens from the air and water impacts of these factories.

In July, 2012, the Environmental Protection Agency announced that it is abandoning its plan to gather even the most basic information from the over 20,000 highly polluting and largely unregulated factory farms in the United States. According to sources, “This move by the EPA is a dereliction of duty.”

The federal and state regulations of CAFO’s are weak, and many of the newer Farm Bills which have been passed, favor CAFO’s over the health and environment. Why?

Muncie Voice will explore CAFO’s and the research being done by these organizations represented at the conference in a series of articles. Public health is a priority of our government, and it was rather obvious when speaking with these advocates that our government is falling short of their role and actually obstructing efforts to protect citizens from the negative effects of these operations.

What is Our "Personal Health Manifesto?" 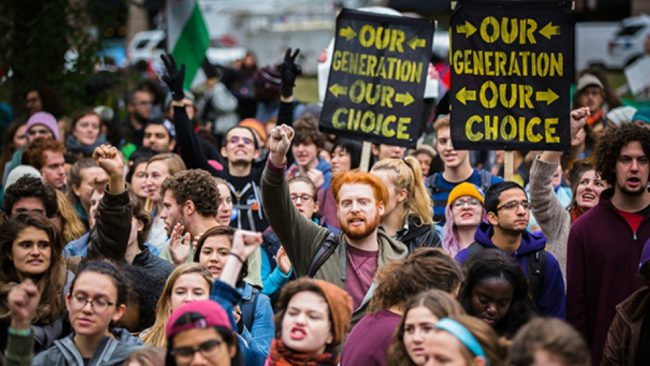 How Millennials are Affected by Debt

The Divided States of America

US Internet Speed Lagging Behind Competition