Muncie, Indiana – For those who follow me on Facebook, know I get into good debates from time to time with people who are prone to racism or classism. As a culture which has undergone years of political correctness, we’ve learned to take our isms underground. We use code words to hide our ism’s. It doesn’t matter how “underground” we try to take it, it’s always there right below the surface.

Haney Lopez says these isms are then called to the surface by very savvy public relations people and politicians by using “Dog Whistles”.

Finally, a sort of euphemism for racism and classism which makes sense.

What do Cadillac-driving “welfare queens,” a “food stamp president” and the “lazy, dependent and entitled” 47 percent tell us about racism? The anger lurking below the surface when speaking about President Barack Obama. “He’s been the worst president we’ve ever had!” Then ask them to be more specific, they either use false data, rhetoric or no justification at all. Statistically, and factually, the President has done exactly what most conservatives have wanted, but he still gets lambasted by their media which caters to a different crowd.

I grew up in Muncie, Indiana, an urban community which boomed with automobile parts manufacturing. More specifically, I lived in a suburb of Muncie called Yorktown.

According to the environmental geographer Laura Pulido, the historical processes of suburbanization and urban decentralization contribute to contemporary environmental racism.

In the 1960’s through 1980’s, the city schools served a diverse population most typical of an urban setting. Like most communities across the Midwest and the South, the civil rights movement called for integration which caused emigration of whites to suburban areas. This is why the percentage of whites in Yorktown are so much higher than the urban seat of Muncie.

Some will say that Yorktown doesn’t have a stone wall surrounding the town to keep out certain people of color, but minority populations tend to be poorer and less mobile. The cost of a home and income requirements keep the affordability out of reach, so it’s not blatant, its institutional racism.

Aimee Robinson-Fant has written some excellent articles for Muncie Voice about race, and I recommend you read them here and here.

Regardless of what part of town you grew up in, or whether you moved to the “suburbs”, there was always an “Us” versus “Them” mentality. Our social upbringing had much to do with it, and even our economic system pushes competition against each other. It doesn’t matter whether it’s a white-black, black-white, management-labor, rich-poor, north-south, etc. You wanted to avoid “Those People”.

Talk about the quintessential code word for classism and racism…”You don’t want to be caught over there associating with those people!”.

I hear it quite often around town, and have been caught saying it myself. I never realized just how dysfunctional with ism’s I was until moving from Muncie to Orlando and then to Miami in the mid-1980’s. Talk about culture shock. I can remember being on elevators or trams and being the only white English-speaking person. At work, I was told, “Don’t go to lunch in this area of town or venture west from downtown”. I’m glad I ignored those people. I got to taste authentic Cuban food and discovered Cuban coffee – I rarely missed an afternoon Café Cubano. Muy bueno!

This isn’t another beat down article where the author shames the readers. I can do that on Facebook or Twitter, but like Aimee does such a wonderful job doing, it’s meant to be informative. The reason why we must address our own isms today is we are no longer a large segregated community where we can isolate from each other. Our community has shrunk. The lines that separated us are gone. The days of North, South and Central are gone forever. We’ve consolidated down to one high school.

We need to drop the “Us vs Them” and adopt a “We” mentality.

We also have shrinking resources which means tough decisions need to be made. But, this is by design.

Here is why this topic is even more important now than ever before. Our social isms have become points of strategy for our political system. A deliberate political strategy designed to keep us apart. It’s a strategy likened to “divide and conquer”, and it’s as old as civilization – empire builders use it to expand their reach. Monarchs used it to keep the commoners from rebelling against the rulers.

Here is what Haney Lopez said while on a Bill Moyers program talking about using the “Dog Whistles”:

Haney is an expert in how racism has evolved in America since the civil rights era. Over the past 50 years, politicians have mastered the use of dog whistles – code words that turn Americans against each other while turning the country over to plutocrats. This political tactic, says Haney Lopez, is “the dark magic” by which middle-class voters have been seduced to vote against their own economic interests.

Read that last line again, “Middle-class voters have been seduced to vote against their own economic interests.”

Mitt was speaking to an all white crowd of 1%’ers who were most assuredly were going to vote for him anyway. Well, if minorities are perceived as the population who votes democrat to continue getting “free stuff” like food stamps and cell phones (Rick Santorum gaffs), and minorities only account for 16% of the population, who are the other 31%?

Referring back to our local example…Mitt was using his Dog Whistle on white people to vote for him which was a vote against the “perceived” minorities.

Haney Lopez describes this very well, “So in a way, the poor are being racialized. So even when they’re white, even when it’s half the country, and he’s talking about people who don’t pay income tax, he’s saying, these people are like minorities.”

I’ve posted countless articles and polls on social media showing how dependent the southern and some Midwestern states are on the federal government. Many of our red states have the worst health and wellness record in the nation, wider income disparities, lower personal income per household, and guess what?

Yes, they all vote for republicans who are cutting benefits to their states, refusing to expand healthcare, and pass laws refusing to accept higher wages.

Why would the white people in those states do that to themselves? Why would they vote for tax cuts on the rich which forces them to pay more in taxes for government services?

They think they are sticking it to the minorities in their state – the “freeloaders who are really dependent upon the government and vote for free-spending liberals who take money from working people and give it to freeloaders in exchange for votes”.

Mr. Lopez calls it out as well, “It could only resonate because whites are steeped in the idea that the federal government is only helping minorities, it’s only helping losers, and they don’t want to understand themselves as losers.

You might have to re-read this article again to this point to see where the trap ensnared us.

There are great story lines about Ronald Reagan’s speeches when he referenced “welfare queens” and “young bucks on food stamps”. He did it on purpose to conjure up racist sentiments. As Haney Lopez confirms with Bill during the interview:

Republicans for 50 years have been telling voters, the biggest threat in your life is that minorities are going to hijack government. That government has been taken over and now serves them. So when white voters vote against the government, they think they’re voting against minorities. But in fact, they’re voting to give over control of government back to the very rich, back to the big corporations.

We must be critical of the information being delivered to us because it is deliberate. What we read, hear or watch isn’t all to inform us with truth, much of the time it is intentionally designed by marketing and public relation people to sell you something. A product, idea, concept, belief or service. Our economic system, our market system, capitalism, has a principle called “caveat emptor” which means, “Let the Buyer Beware”.

Well, we are now in the Information Age and there are thousands of people whose careers and livelihood depend upon selling you something, and they’ll use psychology and even chemistry to do it. They’ll manipulate  your personal isms and fears to get you to buy what they are selling. Smart consumers choose wisely because they are cautious, critical and open-minded. We now have all the power in the world at our finger tips – think of your smart phone as shifting the power structure from the wealthiest and smartest people on this planet to you. You have everything you need to combat hate, bigotry and fear.

There really are no more excuses.

Leadership: Why Women Fare Better than Men as Managers 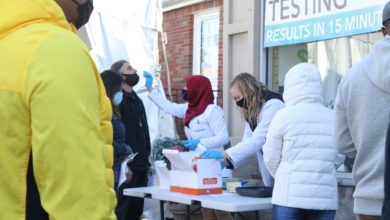 The Emotional Toll Of COVID-19 on Today’s Medical Workforce